Back in a day, Joan and I had a small pre-press business. We used to write, design and prepare for the printer all manner of promotional material, annual reports, prospectuses, information leaflets and the like, mostly as the business evolved, for the not-for-profit sector , or corporate ‘social responsibility’ departments.

The whole business had been suddenly and completely transformed by the arrival of the Apple Mac and the desktop publishing revolution. We were early adopters because productivity soared and quality control became streets easier, particularly when it came to the typesetting, previously the domain of third party, unreliable and often illiterate photo-typesetters. It is amusing to recall that our first purchase of IT kit, two Apple SE computers and an A4 laser printer, set us back £10,000!

The memory capacity of the machines in those days was limited as were internet speeds, so we would save a job to floppy discs (remember those?) for the printer to take away. Images make much larger files, and to get them onto floppy discs we’d have to reduce their size as much as possible, cutting out as much redundant information to just this side of the point where quality deteriorated visibly.

I was preparing a job, I forget what, which included a small mugshot of John Major, then the PM, and, while trying to reduce its file size, I mistakenly hit the wrong keys and stumbled on a strange perceptual effect. With a lot more refinement, I’d produced my first pixelated caricature, of the original Grey Man. 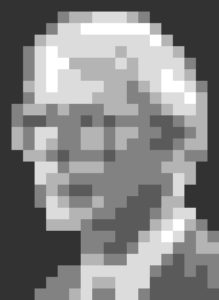 If you don’t ‘get’ whom the image depicts, move back from your computer and half close your eyes until you do. I hope you’ll agree it‘s extraordinary that the uncompromising geometry of the square so sparingly deployed can still evoke a very recognizable image, including even the suggestion of that annoying upper lip formation so cruelly lampooned by Spitting Image. I made this in 1997, and was so excited that a week or so later I produced this. 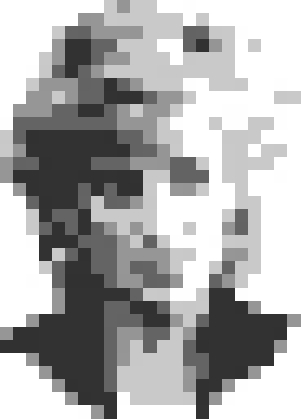 Now I appreciate this isn’t everyone’s cup of tea, but I spend quite a bit of time on this sort of thing, so I thought I’d better come clean. Before you move on or surf off, I invite you to actually pause, and look at this in a very focused way for the minimum of just one minute, and preferably, if you can bear it, two. Stare at it, explore the shapes, the edges, get up close, very close, move back to see it from a distance, gaze at it.

I hope after a little you will enjoy the unnerving effect of things not being quite what they seem. From a distance you have an immediately recognizable likeness, but close up you see just a mess of interlocking rectangular shapes. That’s the buzz. I find it visually surprising, and curiously hypnotic, which is why I do this stuff.

Isn’t this all stale buns? Well it wasn’t in 1997 because even over the early internet I was able to search for similar examples and there was, I recall, practically nothing. Today of course, and previously, there are and were thousands of so called pixel-art cartoon and games characters (remember Space Invaders?), but nothing of the kind of minimalist but nuanced hard-edged caricatures that I produce.

Then there was the highly controversial portrait of Myra Hindley made up of children’s’ handprints by Marcus Harvey in Saatchi’s Sensations exhibition at the Royal Academy in September 1997, (click here ), but its intent is quite different.

There were several exhibitions of computer generated art in the late sixties both here, in America and doubtless elsewhere, but the first published pixel art was a greyscale image of Abraham Lincoln from the US 5 dollar note, by Leon Harmon, an engineer at Bell Telephone Laboratories specialising in facial recognition. In November 1973 the Scientific American published his paper ‘The Recognition of Faces’ which included this image:

Pretty hard-core I’d say. I’m not sure I’d recognize it if I hadn’t been told, but this is where it all began. There is a very well established American Artist, Chuck Close, who claims to have been painting pixelated images since before anyone, even Harmon, but again he’s not trying to do what Harmon was: to minimize the information required for a recognizable image. Incidentally the Lincoln image was used as the basis of Dali’s painting Gala contemplating the Mediterranean Sea, and lithograph Lincoln in Dalivision in the mid ‘70s.

Of course the likes or Harmon and his collaborator Ken Knowlton had access to computers which, for all I know were the size of a small office, and nothing much more happened until the arrival of the Apple Mac and the PC, with graphics capacity. That’s when I came in, by mistake. And I’m doing exactly what Harmon was doing but with much more powerful machines. In case you are under any misapprehension, I point out that unfortunately there’s no ‘Create exquisite pixelated caricature’ button on my computer, and the whole process is pretty laborious.

I’ve not had any real success yet with Trump, Jezza or Lady Glumbucket (thanks to Quentin Letts for that), but I’m on the case, in the meantime here are one or two others from the rogues’ gallery, and if you want to see more, look up #squarifiction on Instagram. I hope you enjoy them, but if not, never mind. 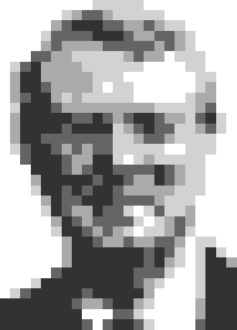 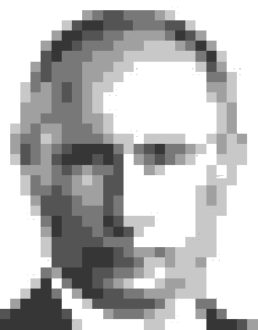 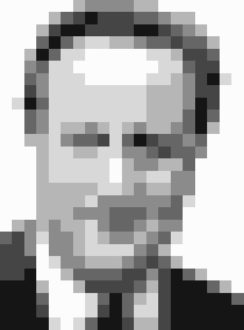 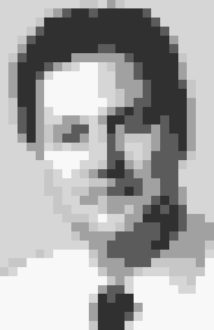