I took two ice-pack cooler wine sleeves from the freezer, and desperately pulled them up over my wrists like cuffs to prevent passing out in the heat. They say it’s going to be worse tomorrow, but I’ve been working on my technique for cooling the blood at the wrist pulse-point, so I should survive. The blood circulates the whole body in about two minutes, I understand, and the wrists, where the veins are near the surface are ideal spots to apply coolant for a quick drop in blood temperature, as everybody knows. What I quickly discovered was: an ice-pack’s too achingly cold and running water not cold enough, but an open can of, say, Kronnenburg 1667, straight out the fridge, is, ahem fortunately, just goldilox.

Try it. Take your chilled can of whatever from the fridge and open it. Balance it on your knee, with the opening towards you. Clamp it near the bottom between the insides of both wrists; then clasp your fingers together at the front. There you are, perfectly comfortable; better than goldilox actually, for should you get a little thirsty while cooling the blood, you can quite easily lift the can, without disturbing the wrists’ contact with it, and take a sip or two that’ll cool the innards at the same time. 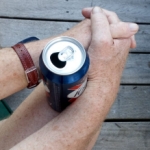 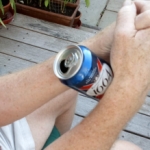 All this happened towards the end of the hottest day since hell froze over, in living memory, whatever etc. In the morning Joan and I drove miles to a remote, nondescript suburb to attend our fifth treatment at the hands of a practitioner in some arcane branch of Japanese acupuncture.

Our therapist, who was fulsomely recommended, is a man of little self-doubt and, perhaps too often, recounts tales of his near miraculous cures. We knew what to expect: the YouTube de-stress music and around 30 disposable steel needles sticking out of hands, wrists, arms, ankles and head. Once inserted, often unnoticed, they must remain in place for nearly half an hour, so there’s plenty of time to trance off. Tell the truth, we feel great after each session, but the benefits don’t yet seem to last. For now we persist. As I contemplate the pincushion of my limbs, I’m reminded of the perforated fate of St Sebastian. Both of us are in search of long-term freedom from pain, me in this world, he in the next, but there’s not much else we’ve in common except perhaps, I’m beginning to fear, we’re both just martyrs to our own gullibility.

We got back hot but not quarrelsome, and after lunch it was down to the barber’s for a haircut. I slunk down the road, hugging the hedges and walls, gleaning whatever little shade the time of day allowed. Then bliss; aircon-bliss. Ahmet was nearly on his own. He’d just finished razoring up a teenager’s sharp Number 3 with fade, and I was soon in the chair.

Ahmet knows, he claims, the cut of all 200 of his clients from memory. As with so many of his trade, he’s a gasbag. He’s solicitous enough, even obsequious, enquiring about my back, hips and garden, but his enquiries are really just cues for him to launch a manic diatribe about his own back, hips and garden and his dubious remedies, which, gesticulating at me saucer-eyed in the mirror, he insists with almost aggressive emphasis, I must try. I have to remove my hearing aids for the cut, his English is not great and the queue behind him grows, so the conversation thankfully peters out. He comes originally from Algiers, and his father was a diplomat, he tells me. Perhaps it was Ahmet senior who, observing his boy’s innate garrulousness, advised him he’d go far as a cab driver or gents’ hairdresser. Anyway, my Berber barber means well enough and he does a decent job on the old Barnet so I wish him a good holiday with his sister, who’s loaded (naturally), in the South of France.

Back home for a chukka of garden maintenance. Tedious work it is, made bearable by listening via headphones to the miniature portable radio in my pocket that Joan gave me for Christmas. Trouble is I don’t get on with earphones, but I can’t get a hat on if I wear headphones. This is what Neil, intending to be funny, came up with. 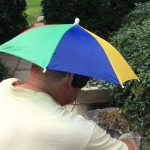 Well he was funny, droll even, but it turns out the elasticated band that holds this diminutive parasol on the head is very easily placed over headphones, and makes a stable set up that works a treat; it does help, mind, that the garden’s extremely private. As you can imagine, an hour in the swelter like this was simply too much, and that’s where we came in at the beginning, cooling the blood on just one bloody hot day this summer.

It’s time for me to have a break now. Have a lovely life filled with riveting trivia, and I’ll be back on the Sunday after the August bank holiday.