The evening sun has slipped beneath the highest foliage of the cherry tree. The leaves of climbing roses and clematises are back-lit by the siding light and their brilliant green set off against the darker hues of close-cropped lawn beyond, now shadowed. Here, on sunny weekend afternoons, dimple-bummed grandchildren run shrieking through the water-sprayer, but now all’s quiet, the air is still and warm, laden with the sultry fragrance of honeysuckle and jasmine; time and place for a glass of wine, and to savour the garden glory of high summer. Savour it we must, for at the rate which I pass time, it’ll be over far too soon.

So what are the spectacularities of which this glory’s made? We live in an area of blocks of terraced houses, but we’re lucky to have a back-garden about the size of a tennis court, maybe longer. We’re surrounded on all sides by neighbouring houses, so a priority for the back garden, previously pretty open to prying eyes as well as rather jungley, was privacy. We wanted an oasis where, when your raised your eyes, your view was not the dismal prospect of other people’s taste in net curtains, but something therapeutic.

At the front it’s privet for privacy; sizeable hedges which, when I used to cut them, were so perfect, though I say it myself, passers-by would stop, stare and often comment approvingly. At the back, at the bottom, it’s what we call ‘the shed’, which runs nearly the full width. When the children were young, it housed a games room with ping-pong, the site of many exciting battles. Now it’s our attic. In a separate smaller part, horticultural pharmaceuticals and tools, equipment, brooms, ladders, hammers, screwdrivers, saws, mole-wrenches and unfinished cans of paint are stored. It has that wonderful, authentic garden shed smell. What is it? Slowly evaporating white spirit with a hint of petrol and chainsaw oil, maybe.

In front of the shed on the left there’s a large clump of bamboo, and a profuse, bright red flowered rambler, which climbs 5 metres to the top of an old tree stump. I’ve seen it on Google Earth, so that makes it visible from space.

The long sides are brick walls, above which rise trellises, now largely hidden in the tangles of various climbers. Across the lawn close to the old cherry, whose fruits in June normally hang like grapes, and are so scrumptious it’s not possible to eat enough, we come to the big ones: the two pergolas. One spans the width of the garden, a colonnade  four metres high. On it there’re trellises of roses, clematises and two enormous and spectacular Chinese jasmines. The other runs at right angles back to the side of the conservatory. Along this swarms a late flowering rambler, and  up a post, a clematis.

This picture taken from the top of the house gives you some idea of the geography. 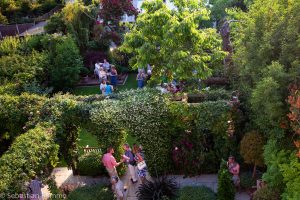 You can see the two pergolas, the one across the garden edging a terrace with implanted shrubs, and beyond, the lawn and the hardwood dais in its corner. At the top of the picture, above the group sitting on the dais, you can just make out the reddish tinge of the blooming climber (Chevy Chase, visible from space) and behind it the glazed pitch of the shed. Just beyond the main pergola are the top branches of the old cherry, behind which the sun slips at close of play.

When we sit or stand on the deck, we don’t see the backs of the adjacent houses, nor their net curtains, for these pergolas are cunningly placed to block their view. We look up to the massive pink profusion of rose bloom-swags that hang from the second pergola on the left. ‘Blushing Lucy’ is its name and Mills & Boon its tenor, yet its display is so outrageous, its hyper-romanticism is forborne. In front, the huge Chinese jasmines, with their myriad star blooms, drench the air with perfume as well as exclude the sight of top floors of houses backing onto the wall at the bottom .

This is what we see when we sip our wine of an evening and look up. 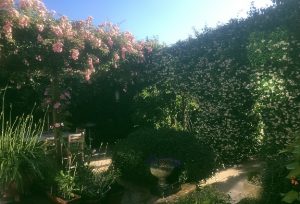 You’ll agree: it beats net curtains; certainly glory enough for us. What you can’t see see are the affairs of the clematises. Blue Jackman nods deferentially to the blousy pink Comtesse de Bouchard but his entanglement with the late-flowering Duchess of Albany will soon be exposed, while on other posts, magenta Niobe is inextricably involved with the purple President. Nearly all the credit for the planting goes to our good friend, and professional adviser, Alison Wear.

One year we were persuaded by a local councillor to enter the borough’s Best Back Garden Competition. It gives me pleasure to remember that we won. Other years we opened the garden to the public via the National Garden Scheme, but stopped when we found the money raised was barely worth the effort. The garden, though, has never been so assiduously groomed as then. It was even featured in an issue of Amateur Gardening. This is what it looked like an hour before the public was first admitted. 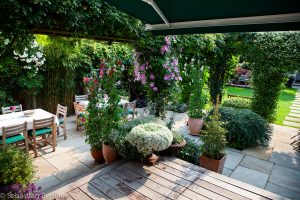 Paradeisos is ancient Greek for an enclosed garden. There are so many, many gardens finer than ours, and it’s by no means Eden, but when we sit and sip of a summer evening, we forget the greenfly, the box tree moth, the ants, the vine-weevils, the slugs, snails, squirrels and foxes, not to mention the weeds, the graft and the back-ache, and think that here we have, however fleetingly, a little paradise gained; the collision of the Cartesian and the botanical. The beauty (and the curse) of it is: we do practically everything ourselves. Purrrr, purrrr.